It's hard to talk about buffers and not talk about true bypass. So this month we will be talking a little bit about both but mostly we well be talking about buffers in your signal chain and wah output buffers. True Bypass and Buffers: True bypass is a switching method that bypasses the effect via a hard wire on the switch. It basically sends your signal from the input of the effect to the switch and right to the output jack with no connection to the effects circuit. True bypass is used to eliminate the effect of a pedal's input load on the signal. The diagram below shows a simple example of true bypass wiring. The signal comes from the input jack to the center lug of the switch. When the switch is pressed, it switches between the lug above and below this center lug. The same with the second row of lugs with the output jack attached to the center lug. You can see how one way the switch connects the circuit to the input and output jacks and press the switch again and it disconnects the circuit and connects the true bypass wiring. 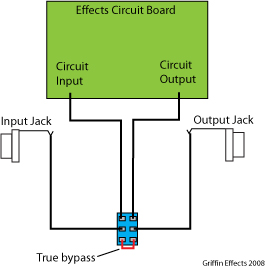 Do you want all your pedals to be true bypass? Well, the answer to that is yes and no. The fact is you still probably need at least one buffer. Two would be even better. One at the beginning of your effects chain and one at the end. A well designed buffer can be just as good as true bypass. The purpose of the buffer is to provide a low impedance, high capacitance load for your guitar's pickups. This allows for low degradation of your guitars signal.

So bottom line, if you have a bunch of pedals that are true bypass and some long cables, with all the pedals off, you will have a huge loss of tone and signal level. If you put a buffer at the beginning and end of your signal chain, this can maintain your guitars signal.

Boss, Ibanez and some others have incorporated very good buffers in each of their pedals. These provide a high impedance load to the signal chain and then "drive" the pedals after it with their low impedance output. This is good because it always provides a low impedance signal.

Say you are using 10 or more pedals and you have a 20 foot or longer cable going from your guitar to the pedals and you also have a 20 foot or longer cable going from your effects to your amp. This is going to create a loss of signal and can probably be heard as a slight dulling of your tone or loss of treble. The best place for this pedal is at the end of your effects chain. It will drive your signal through the long cable back to your amplifier. If you have all true bypass pedals, putting this buffer at the beginning of your effects chain is a good idea. Whether you put a buffer at the beginning of the effects chain or at the end of the effects chain you will notice that your signal and tone have been restored.

Here is a simple schematic of an opamp buffer: 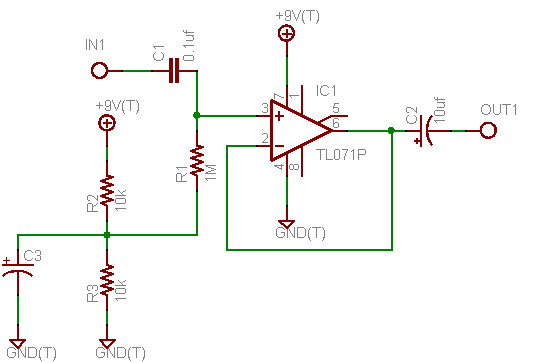 Opamp buffers have a very low current drain and the output impedance is very low compared to transistor buffers. R1 controls the approximate input impedance. This could be built as a stand-alone pedal. A 1M resistor from input to ground will help with any popping when turning the pedal on and off. You can also adapt this into an existing pedal.

There are also transistor buffers. Below is a schematic of a simple JFET buffer. The input impedance is equal to the paralleled value of R1 and R3 (1M in this example). You can use just about any JFET and you can obtain unity volume by using a JFET with a higher hfe. This can also be made into a stand-alone pedal or incorporated into an existing pedal. 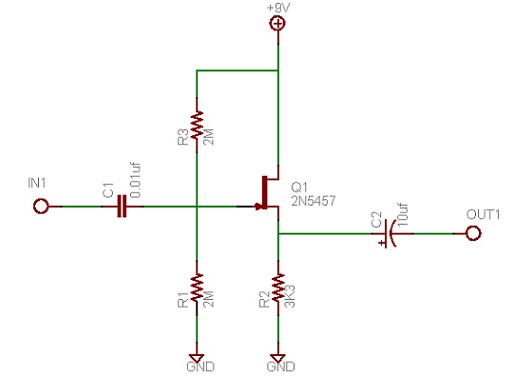 It is well noted that a lot of fuzz pedals and wahs don't play well together. This is due to an impedance mismatch. The simple way to cure this is to add an output buffer to the wah. Vox and Crybaby wahs don't have output buffers. The newer Crybaby wah's have an input buffer but they don't really seem to help with the impedance problem. Below is a schematic for a wah output buffer. The buffer can add some boost so there is a 100k trimpot to adjust it. Again other JFET's can be used. 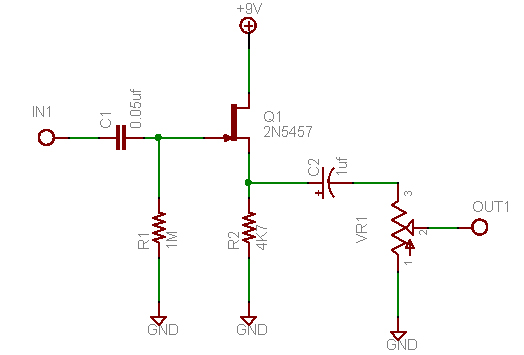 If you have a vintage wah and don't want to mess with the internal circuitry this can also be built into a stand-alone pedal and used after the wah. The advantage to this is you can add a switch to turn the buffer on and off if you wanted to. The con to this is that it is another pedal on your board. I personally would put it inside the wah as it doesn't require any drilling or cutting and is completely reversible.